Recently, the City of London has seen an increase in phone snatching, whereby devices are stolen by thieves on mopeds and bikes, from unsuspecting people by the side of the road.

Each year, thousands of mobile phones are stolen by pickpockets, opportunistic thieves at restaurants/bars, and drive-by snatchers.

This raises the question – where are London’s phone theft hotspots? Which boroughs have the highest rates of phones being stolen from the person?

To find out where you’re most likely to have your phone stolen in London, we made a freedom of information request to the Metropolitan Police.

We obtained data on the total number of phones stolen from the person in each London borough in the previous calendar year. 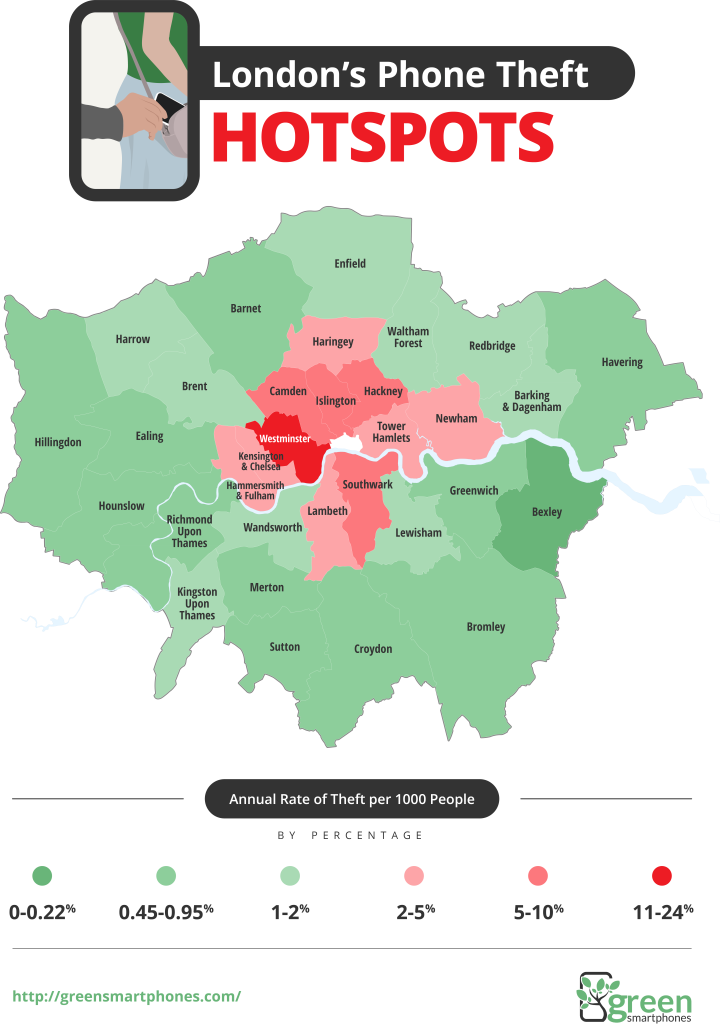 The places you’re most likely to have your phone stolen in London are:

The main reason Westminster has double the theft rate of any other borough is the number of pubs and bars in the area. Opportunistic thieves often snatch phones from restaurant tables and bar counters – pub patrons should be particularly wary of this, no matter where you are in London. It’s important to never leave your phone out of sight when out in public, even for a split-second.

Neighbouring Camden also has a very high rate of phone theft, in part because it also suffers from a higher crime rate than the London average.

Like Westminster, Camden also has a thriving bar scene and plenty of nightlife, giving thieves plenty of chances to steal phones from unsuspecting pub-goers. However, as the borough is also home to shopping precincts and markets with plenty of foot traffic, Camden is also a pickpocket’s dream when it comes to stealing smartphones.

Hackney is a trendy, popular borough, with an active nightlife, but also a high rate of knife crime, and other violent offences.

The high rate of phone theft in Hackney is likely a combination of phones being stolen from unsuspecting restaurant and pub patrons, as well as muggings and drive-by snatchings of phones from the person.

The places you’re least likely to have your phone stolen in London are Bexley, Richard Upon Thames, and Sutton, at a rate of 0.22, 0.45, and 0.46 phones stolen per thousand people respectively.

Each of these areas is a relatively quiet borough in Greater London, with a much lower overall crime rate than the city average. These areas also have fewer areas of heavy foot traffic, and fewer busy bars and pubs where thieves and pickpockets can operate.

How to prevent your phone from being stolen in London

No matter where you are in London, there are a number of things you should do to prevent your phone from being stolen.

Get the best smartphone deals, delivered straight to your inbox